Outdoor Kitchens for Your RV 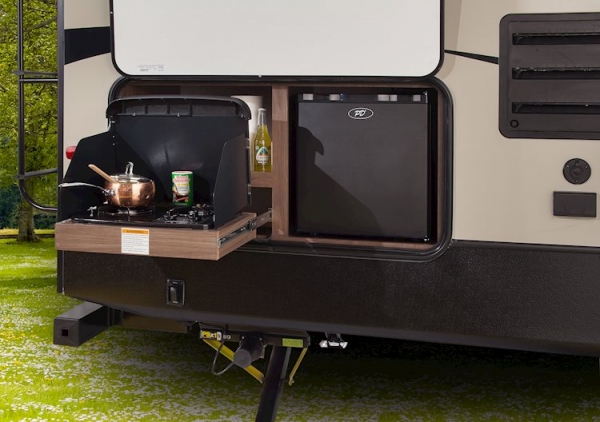 If you want to cook outside the RV—and let’s face it, that’s what most RVers do on most days—you have to set everything up: the grill, the table, the chairs.

Now you can forget about the grill. No, sandwiches are not on the menu. You’re still going to cook out, but if you have one of the many new RVs so equipped—including trailers, fifth wheels, and Class A, B and C motorhomes—you’ll have a foldout grill or kitchen that makes outdoor cooking simpler. More comprehensive cooking centers are a tailgater’s dream.

Outdoor cooking areas aren’t new to RVs, but originally the outdoor food-prep areas were the only one the RV had, as on a teardrop camper. On a bigger RV, an outdoor kitchen is in addition to, not in place of, the RV’s traditional interior kitchen. And more manufacturers are making the external ktchens available as options or standard on upscale RV models. 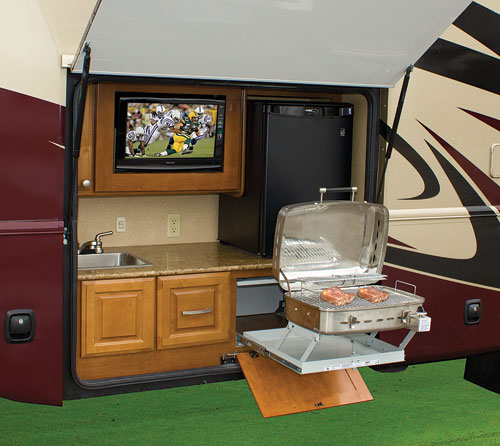 You might just be surprised by how well equipped some of the outdoor kitchens are. Few are identical, even among those offered by a single RV manufacturer.

The more luxurious examples have not only a gas grill, but in many cases also a counter, a sink, a refrigerator, and cabinets and/or drawers for stowing away all the utensils and accessories, even dishes.

Outdoor entertainment centers have flat-panel high-definition TVs; stereo receivers, disc players and speakers; and in some cases, sinks with running water and bars, or at least a counter that can be used as a bar. There are even some kitchen/entertainment center combinations.

A good example of a basic kitchenette is available on some Keystone Hideout models. The kitchen has a slideout gas cooktop and a mini fridge beside it. There’s also a shelf/cubby area for storage. It’s compact and efficient. Probably best suited for breakfast, it does not include a grill.

More elaborate outdoor kitchens have everything you need to refrigerate food; cook it on a foldout stovetop or grill, or in a counter-mounted microwave; and serve with ease from the countertop. Almost any upscale outdoor kitchen will include a sink with running water, even if only a small one.

Grills and stoves may be mounted in drawers that slide out, or on arms that swing into position.

A nifty design on some outdoor kitchens is a fold-up door. The cover is flat when traveling, painted and decaled to match the side of the RV. When opened, it serves as an awning, deflecting rain and sun.

The Thor Outlaw Class A Toy Hauler has an entertainment center that seemingly has everything but the big game. It’s perfect for a tailgate bar setup. The 50-inch TV is nestled into built-in cabinetry. Below it is a faux stone countertop with a sink and running water.

Under the counter are built-in cabinets and a bar fridge. To the left of the entertainment center is a half-bath with an exterior door—perfect for accommodating party guests without having them walk through your living quarters.

Some manufacturers mount the giant TVs on slides. An end-mounted hinge allows the TV to be viewed from the kitchen, or when swung away, from the picnic table.

And Then There’s the Pull-Behind Kitchen

Maybe the neatest outdoor kitchen you’ll run across isn’t available from an RV dealer. It’s a roomy home-built mobile kitchen made from a used popup trailer, with the look of an old-time refreshment stand. It’s pulled behind a motorhome. Check it out.

Now, that is a tailgate party waiting to happen.