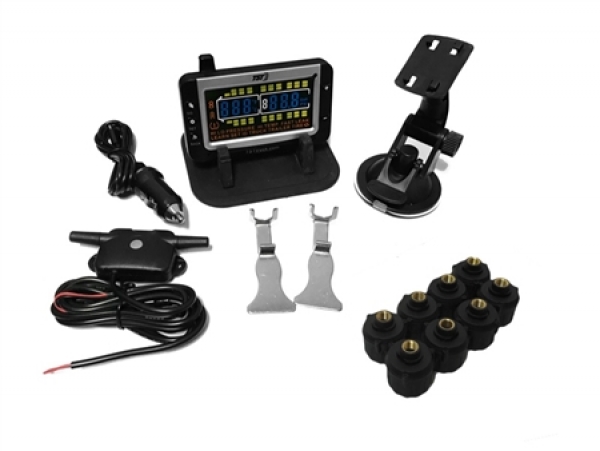 If your tow vehicle, motorhome or trailer lacks a tire pressure monitoring system, commonly referred to by its initials, TPMS, the safety feature isn’t difficult to add. Adding TPMS is a good idea for RVers.

Losing a tire at speed is nasty business. The sudden loss of pressure—a blowout—can cause a vehicle to swerve or even to roll over. Tires that fail can also shred, and that can cause considerable damage to RV bodywork, especially aluminum bodies.

Losing a tire in the middle of nowhere on a long trip is no picnic, either. Getting a truck to come in and jack up any of your vehicles to change a tire is often far from instantaneous.

TPMS add-on systems basically have two parts—the sensors, which wirelessly send signals reflecting air pressure from each tire, and a wireless receiver, which gathers the information and displays it in any of several ways, depending on the system.

The monitor might display actual pressure in each tire, or it might simply show a message to check a tire, or all your tires. Individual readouts are the better choice.

Original equipment systems have monitors that are integrated into the dashboard. Aftermarket systems can’t do that, of course. They have monitors that attach to the instrument panel, on the surface or on the lower edge, or on a console surface. They’re reasonably attractive, so adding one won’t spoil your view of the instrument panel. Because they use their own batteries, there are no wires to run or connect.

Signals are sent wirelessly. Some sensors are mounted internally, which will cost more to mount because you’ll need a garage or RV center to do it. Then the tires and wheels will have to be balanced. The alternative is sensors that screw onto valve stems as replacements for valve stem caps. Manufacturers say there is no need to rebalance tires after replacing the valve caps with the lightweight sensors.

Some systems, in addition to monitoring tire pressure, monitor tire temperature and send readouts to the same monitor.

TPMS kits come with different numbers of sensors and are priced accordingly. Four would cover your tow vehicle only, and not even that if it has a dually rear axle. Kits usually include a tool to help mount the valve-cap type sensor on the inner wheels.

It’s best to get a set that has enough sensors to read the pressure of each tire on your tow vehicle, your trailer and your spares. If your motorhome tows a dingy, get sensors for that vehicle, too. Look for models that offer, in addition to the sensors in the set, additional individual sensors or supplemental sets of two. That way you can get as many sensors as you need. You also can replace sensors that go bad. Regardless of where your sensors are, they’ll read out on the dash display you install as long as they’re compatible—the same brand and model.

Sensors are water resistant to help them hold up, a must if you’re towing a boat trailer. Screw-on sensors typically must be removed to add air to a tire, then screwed back on.

Sensors last about five years. After two years you should replace the watch-type flat batteries. Better to replace them than have them fail on a trip. Some monitors have rechargeable batteries, which don’t have to be replaced but can be recharged from the power port/lighter.

A nice thing about the screw-on type of TPMS sensors is that you can remove them while your RV is stored. That prolongs the life of the sensor and the batteries, if you remove them too.

Costs vary by make, model and retailer. In general, a set of TPMS and temperature valve stem caps for eight wheels costs $380 to $600, including the display monitor. A set of 8 with internal mounts for wheels adds about $100. A color monitor might also elevate the price by $25 or so, but it’s useful for systems that measure both pressure and temperature.