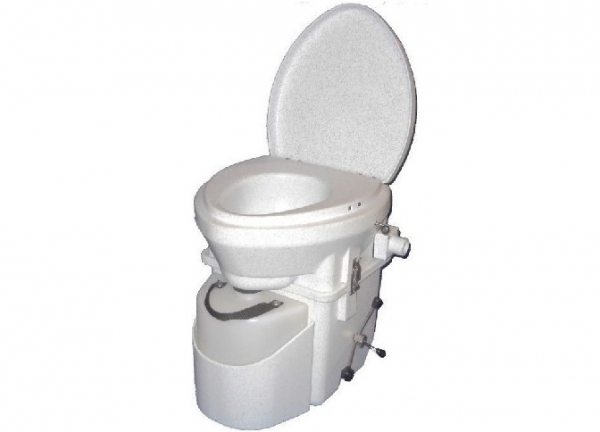 If you really hate emptying the black tank on your RV, consider switching to a composting toilet. Yes, you have to empty it, too, but it’s not as messy or as smelly.

You won’t have to use your black tank at all.

Composting toilets are safe—so safe that they are installed in many national parks. Solid waste in small quantities is treated much the same as disposable diapers, and urine, if disposed of properly, is not considered hazardous.

A good composting toilet costs about $950 and up.

No water hookup is needed for the toilet itself because it doesn’t use water. A composting toiler just sits on the floor, without the need to connect to water, waste outlets or even the floor. You will need an electrical outlet to run the toilet’s small fan, and you will need to drill through a surface of your camper for a small ventilation line.

The biggest question may be what to do with your old water-operated toilet. You can just leave it in place, but that may limit the space for the composting toilet. If you remove the old water-operated toilet, you’ll have to disconnect and properly seal off the plumbing—one line only, since a toilet uses only cold water—and you’ll have to cover and seal the opening to the black tank.

An RV center can supply the parts you’d need, or it can do the whole job for you. Store your water-operated toilet so you can reinstall it if you ever sell your RV.

The composting typically requires partial assembly—unwrapping it from packing material, putting the tanks in place and possibly attaching a handle for the composting bin.

You must set up the toilet for use by adding coconut fiber (sometimes called coco coir) or peat moss in the solid waste bin, hydrating the material before spreading it out at the bottom of the bin. This must be repeated after each dumping.

Using a composting toilet requires sitting. Men and boys will not be able to stand and urinate because doing so would mix liquid and solid waste, which would affect the neatness and purpose of composting. Mixing would create a stench, so children must be trained to use the composter properly.

A plastic bottle collects urine at the front of the toilet.

A larger composting bin collects solid waste beneath the bowl. Organic material, such as coconut fiber or peat moss, is placed in the composting bin to collect an mix with solid waste. For two people, a block of peat moss will probably last a year, or close to it.

Each time solid waste is put into the bin, you must turn the handle to mix it with the organic matter. That’s how odors remain in check.

Where To Dispose of Waste

To be absolutely safe, you may want to contact the environmental agency in any state where you think you may have to dispose of waste. The federal EPA lists state agencies online. Regulations also may vary by park, and by municipality, so check with them.

Here are some places you should be able to empty the urine bottle from your composting toilet:

Solid waste as it comes from a composting toilet is not yet truly compost. That takes time. But it is not considered hazardous by the EPA. Your bag of waste and fiber is the same classification as solid waste or municipal waste. It’s actually not as bad as a disposable diaper, which mixes solid waste with urine and contains more non-biodegradable plastic.

If you buy a vented, extra base (about $300), you can set it aside an allow it to completely compost before dumping. That’s the ideal method.

Always read the instructions that come with your toilet. Not all models are the same. And check with EPA regulations before you dispose of waste.