Should I Buy a Thermoelectric Cooler for My RV? Featured 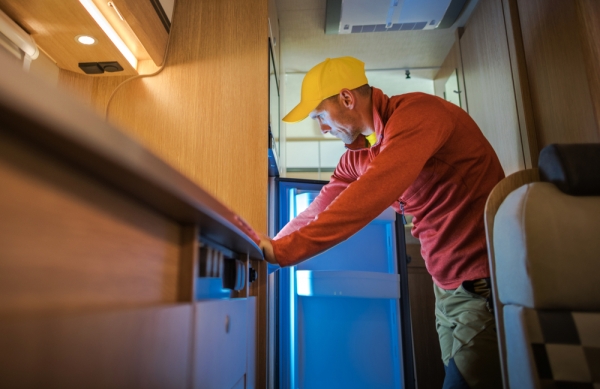 Sometimes you can’t get around the need for a bigger refrigerator in your motorhome or towable. The permanent fix is upgrading to a bigger built-in fridge, but that’s also the most expensive solution.

For $250 or less, a thermoelectric cooler can often help you avoid or delay the expensive upgrade, and it can do some things your built-in fridge can’t.

A thermoelectric cooler typically operates on 12 volts, so it can run off in-house batteries. During travel, it also can draw current from your motorhome or tow vehicle’s accessory outlet, relying on the engine, alternator and battery for current.

A thermoelectric cooler relies on electronics and materials that conduct both heat and electrical current, some at different rates than others. The materials, when powered, move heat from the interior of the cooler to the outside.

Many can reverse the process and keep food in the insulated box warm rather than cool—great these days if you stop for a takeout meal because you don’t want to sit in a restaurant and need to keep the food warm for eating later. Example: Coleman Thermoelectric Cooler, 40 Quart Model No. 3000001495, appx. $115. 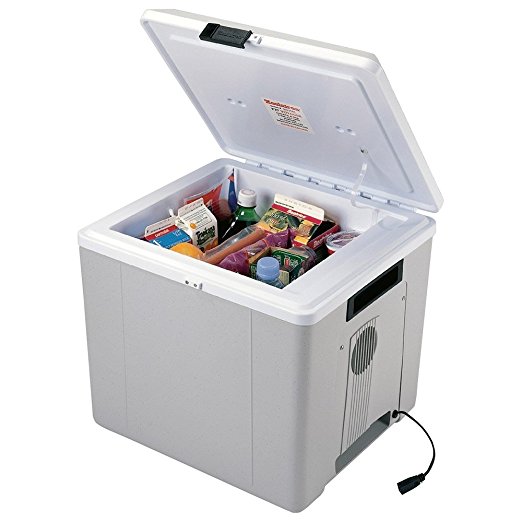 The cooler, if connected to a house battery outlet, a portable battery bank, or a generator with inverter, will cool plenty of drinks. Like a refrigerator, a thermoelectric cooler stores drinks or food in a part of the unit that is, in essence, an insulated box. Still, when used outside, it’s best to have the cooler running in the shade, not in direct sunlight.

Smaller size, of course, also pays off if you want to use the cooler in a tow vehicle or in the cockpit of your motorhome. Many will fit between the front seats, on the floor, on a back seat or in a pickup bed (shaded from the sun is best). That makes cooled juice, “iced” coffee, soda pop and fruit snacks available to the driver and passengers.

And remember: All those cans and juice packs that are in the thermoelectric cooler leave more space in the refrigerator for eggs, meat and vegetables.

It’s called a cooler and not a refrigerator for a very important reason:  A thermoelectric cooler will not bring temperatures in the insulated compartment as low as a refrigerator does.

A refrigerator typically runs with a temperature inside the storage compartment at about 37 degrees, regardless of how hot or cold it is inside or outside the RV. A thermoelectric cooler, however, is typically rated for how much it will lower the temperature of ambient air to cool the inside the box. A good rating is a 45-degree difference. If it’s a particularly hot day, the thermoelectric cooler is likely to have a higher temperature inside its insulated box than on a cool day—more typically in the mid- to upper 40s than in the 30s.

The thermoelectric cooler also will need more time to hit its coolest temperature, unopened for possibly a couple of hours.

You may be able to keep perishables in the cooler for a day or two to augment your refrigerator, but not for a week at a time.

The other big disadvantage is that a thermoelectric cooler does not make ice. It will keep drinks cool for the party, or for hitting the road, but they won’t be ice cold, and you’ll have no ice to help.

Here are some things to consider when shopping for a thermoelectric cooler: