A Place in Georgia with Snow 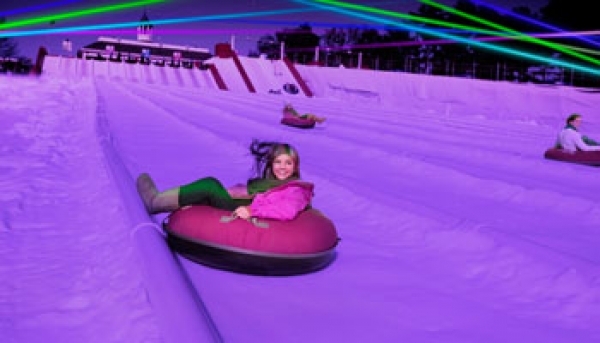 Maybe you travel as a family, and the kids are along, or maybe the grandkids are traveling to Crossing Creeks RV Resort to spend some time with you.

If they came down from the North, one of them is bound to say, “I miss snow. It’s winter. There ought to be snow.”

Hmm. Unless you travel out of state and hit a ski resort (there are none left in Georgia), that’s not likely to happen. And if you don’t ski, well ….

Go to Atlanta. Atlanta? For snow? Well, it’s not far from there.

It’s at Stone Mountain Park, about 16 miles east of the city.

The snow is made by machine, and it gets the job done. Many ski resorts on the edge of snow country make their own snow, especially in warm winters.

And what exactly do you do with manmade snow outside Atlanta?

The side of a hill — call it Snow Mountain, please — has lanes created in the snow, so it looks like a giant white sliding board. Starting at the top, tubers park themselves in the doughnut hole of their tubes. And off they go, down the hill — for run after run. A Snow Mountain session is two hours. You can get your own adult pass to go tubing, too. It’s a pretty gentle ride, so don’t be afraid. With the lanes separated, you won’t go bounding into other tubers, and they won’t crash into you. There are even family-sized tubes — rafts, really.

After sunset, the Snow Mountain tubing run turns into Galactic Snow Tubing. It’s along the lines of nighttime laser bowling, or spooky miniature golfing around Halloween — lights, but with snow rather than bowling lanes or putting greens. The colors on the white snow make for quite a show. Remix versions of Top 40 tunes play over the sound system, with the lights keeping time to the music.

Your daily pass includes two hours of tubing, so reserve time at 4:30 or later to experience the Galactic light and sound show, which starts at 5:30.

Playing in the Snow

When they’re not tubing, kids can just play in the SnowZone, building snowmen, getting on their back to make snow angels and just plain having fun. Snow Mountain runs Nov. 8 Feb. 25.

Make sure you dress the kids appropriately. If they don’t have snow pants, layer them and get them into something warm and dry as soon as you get back into the RV.  Hats, gloves and boots are all good ideas, especially the gloves.

You can get a variety of passes, some including entertainment and/or a meal, if you plan to be there for the day. There’s also a daytime Christmas exhibit. Holiday packages are available for RVers and must include an arrival or departure date that falls within Dec. 2-3, 8-10 or 15-31, and Jan. 1-3. There’s also an early New Year’s Eve party for kids on Dec. 31 that ends before midnight.