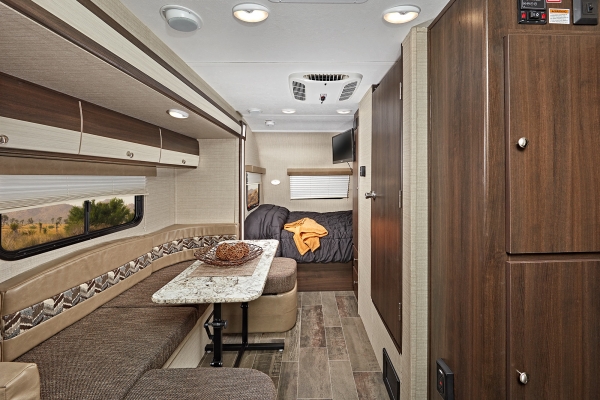 With Millennials and Gen Xers now making up more than half of all RV owners, a trend toward small RVs make sense. Small RVs usually cost less, and younger buyers tend to have smaller bank accounts. Smaller RVs also are easier on the environment, which many progressive Millennials value.

RVs of all sizes are becoming more environmentally friendly, RVIA says. “Green technologies such as solar panels and energy-efficient components are appearing on an increasing number of RV models,” RVIA notes.

It doesn’t take a full-size V8 pickup to pull a small trailer. A compact pickup, a midsize SUV, crossover, and some sedans can pull many pop-ups, teardrops and compact trailers. The shift to small SUVs is undeniable—so much so that Ford is phasing out all cars but the Mustang sport coupe, with the rest of its vehicles to be SUVs and trucks of varying sizes.

Small RVs, because of design innovation, aren’t as cramped as they used to be. 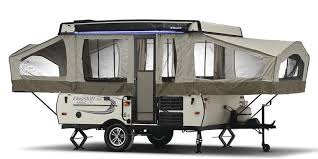 A pop-up trailer with tent sides and zippered windows, with a fiberglass roof that lifts up from the body, remains one of the cheapest tickets to trailer camping. For example, the Forest River 206LTD costs less than $7,500. It has central heat but not air, a roomy kitchen with under-counter refrigerator and adequate cabinetry, plus a clever carryout stove for outdoor cooking; foldout double and queen beds under canvas-covered bump-outs, plus a convertible dinette that sleeps two; stand-up headroom; and a 9-foot awning. The shower is on the exterior.

More protective are new “A” frame pop-ups with hard sides. In Forest River’s Flagstaff Hard Side, you see an awful lot of features and livability. At 2,600 pounds or less, it’s 21 feet long. There’s stand-up headroom; a heat pump; kitchen with 3-burner cooktop, sink, midsize refrigerator and cabinetry; sleeping capacity of four; a dining area; speakers inside and out; toilet; choice of inside or outside shower; and an awning.

Compact travel trailers have less floor space than a 35-footer, but they’re easier to tow, surprisingly spacious, and feature-rich, with standup headroom.

The Keystone Bullet Colt, for example, is 20 feet long and weighs about 3,000 pounds. It sleeps three or four in a queen bed and convertible dinette. The kitchen has a generously sized stainless steel fridge, two-burner cooktop, microwave and plenty of cabinet space. The bath is wet or has a curtained shower. Even a slideout is available. All Bullet Colts have pass-through storage. Buyers typically pay less than $20,000. 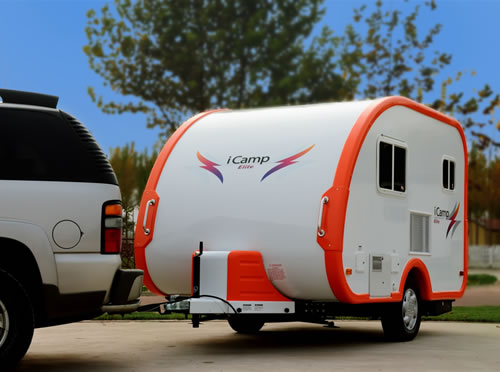 A staple of the 1930s and 1940s, teardrops never were quipped the way they are today. For campers accustomed to sleeping in tents, a teardrop is a nice step up. You know you’re still roughing it a bit when a teardrop has an exterior shower and a kitchen under a rear tailgate. The 14-foot iCamp Elite, however, is more refined, with a wet bath, full kitchen and dinette inside. It can sleep three. Some teardrops pop up for more headroom, then lower for more streamlined towing, and some have a manual slideout that expands space.

A Class B isn’t cheap. A Winnebago Travato built on a Ram Promaster chassis sells for about $100,000 and up. Campers on a Mercedes four-wheel-drive platform may go as high as $250,000. A Class B is easy to drive—it would even get you to work in a pinch. It’s great for weekend getaways, including football games and tailgates.

“RV owners overwhelmingly said in recent surveys that their RVs make it easier to take more frequent weekend getaways or mini-vacations that accommodate busy family schedules,” RVIA noted. Without the need to hitch a trailer, a Class B can be especially attractive to those campers.

More in this category: « Dressing Your RV for the Holidays Hauling a Motorcycle with Your RV »