Should You Run a Generator on Propane? Featured 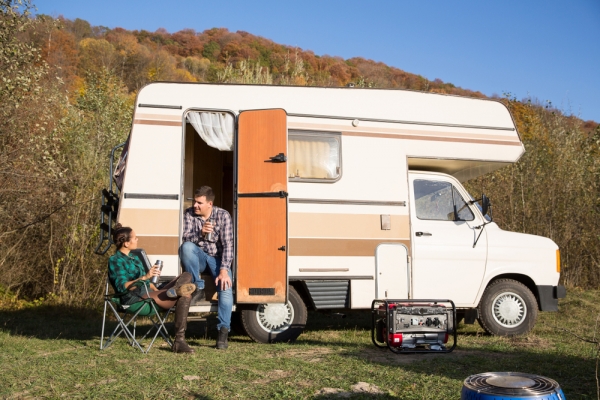 Most RVers power a generator with gasoline, and a few with built-in units use diesel fuel. For many RVers, however, especially owners of towables, propane is becoming increasingly common.

Some models, such as the Champion 3400-Watt Dual Fuel, can run on either gasoline or propane. GenConnex sells a $399 conversion kit for the Honda EU2000i generator to run on propane.

Make sure the portable generator is right for RV use. It should have sound insulation for quieter operation and 110-volt outlets plus a built-in pure sine wave inverter so 12-volt appliances can run from its output.

Here are things to consider:

Propane is, by and large, neater and safer than gasoline. Almost every RVer uses propane. Stored under pressure in sealed tanks, propane fuels stoves and heaters, and maybe a refrigerator and grill. Propane is released by opening a valve, and containers have tip-over protection. They also have an overfill protection valve.

Gasoline, by contrast, is stored in plastic or metal cans that must be opened for refilling and emptying, can spill or overflow, can cover your hands, and can emit flammable fumes.

If you get tired of adding stabilizer to make sure gasoline doesn’t go bad, or you tend to forget, at least remember this: Propane lasts indefinitely without additives. If you’re on the road constantly or for a month at a time, you don’t have to worry so much about gasoline going bad and gumming up your generator because you use it up. But if you camp only sporadically—maybe one weekend a month or just two or three individual weeks each season—propane will remain fresh.

Generators run quieter on propane than on gasoline. If you have a generator that’s already pretty quiet, such as the Honda, it will be even quieter on propane. That’s less disturbing to you and, maybe more importantly, to wildlife and other campers.

If you need to run your generator for longer periods, and you’re in an area where doing so won’t disturb others, propane-fueled generators can run longer without your having to tend to them. The reason is that the runtime on gasoline generators is limited by small tanks. Propane, however, is stored in tanks of 30 pounds capacity (about 7 gallons) and connected by hose. With a $50-$75 automatic changeover valve, also called a regulator, the tanks essentially are combined. When one tank goes empty, as indicated on the valve, you can use the second tank while you take the empty tank for refilling.

Propane runs cleaner, so it’s kinder not only to the environment, but also to your maintenance requirements. A generator running on propane does not build up deposits in the fuel system and on engine parts, so you won’t have to periodically clean them. 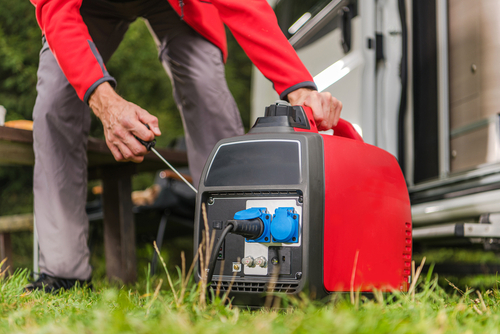 Figure that the energy in a 30-pound tank of propane equals about what you derive from a 5-gallon can of gasoline. Propane produces only about 73 percent of the energy that gasoline does, according to the U.S. government’s Alternative Fuels Data Center, which compares a long list of fuels. Your generator will produce less electricity when you fuel it with propane. Depending on what you are running off your generator, you may need a bigger generator if using propane than if using gasoline. Running a generator on propane at 75 percent is more like running a gasoline generator at 50 percent, so you may need a 3,000-watt generator instead of a 2,000-watt, or need  2,000-watt instead of a 1,000-watt.

You also may need more propane tanks than the two 30-pound tanks typically mounted to your trailer. A full 30-pound-capacity propane canister weighs about 55 pounds, compared with about 32 pounds for a full 5-gallon can of gasoline. A full 40-pound-capacity tank, which holds over 9 gallons, weighs a whopping 72 pounds. Only you know if you can handle the extra weight—or want to. A barbecue-size 20-gallon propane tank could be kept in your pickup bed as a spare without taking up much space.

Because propane produces less energy, you may pay more for fuel than you would if using gasoline. When gasoline prices rise, you’ll pay less. Right now, the price of a gallon of propane and a gallon of gasoline are roughly the same. That means you would pay about 36 percent more for energy in the form of propane than if you buy gasoline. The reduced maintenance costs and no need for stabilizers lower that a bit.

In addition to searching for propane sources, you’ll probably have to visit them more often, not so much because propane is less efficient but because you’ll use more of it when fueling not only a generator but also appliances.

The inconvenience of more frequent refills may level out a bit when you weigh in the safety and storage ease of propane versus gasoline. You gain some convenience, too, by not needing stabilizers. And there are no ill effects on propane from cold weather, a problem especially with diesel.

More in this category: « So Many Ways To Use Velcro in Your RV