A Look at Presidential Candidate Motorhomes from the Past

The Presidential candidate motorhomes have become a key component of election season in the last 25 years. These motorhomes (and their tours) receive names like John Mccain’s “Straight Talk Express” or Jonathan Edwards’ “Marathon for the Middle Class”, and they serve as a means for these candidates to tour the country and promote their agenda.

We wanted to ask the question “What do they actually look like inside?” Here is a look back at some of the more memorable campaign buses and motorhomes of the past...

Below you can see soon-to-be President Bill Clinton and Vice President Al Gore on their campaign bus in 1992. We can see that the seating is in a custom arrangement, but as expected, there are no visible sleeping quarters in this motorhome. These vehicles are typically used more to stage campaign meetings and conduct interviews than they are to live in. Strangely, Tipper Gore is not wearing a Clinton/Gore button, but rather a large button that just says "Hillary". Was this a nostrodomus-like premonition? 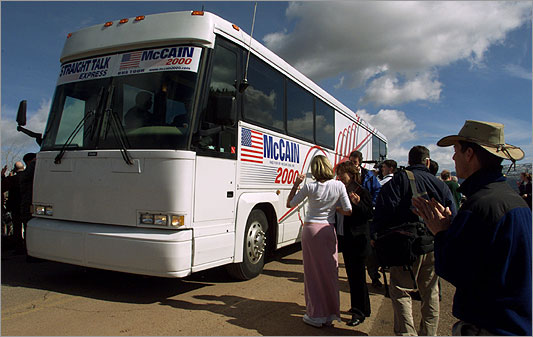 Here is a look at the outside of the Bush/Cheney tour bus from 2004. Made by provost, this one has extensive satellite and communications capabilities, as well as a loud speaker system that has been installed on the roof. The interior looks toned-down when compared to the rich mahogany interior of Mitt Romney's motorhome. 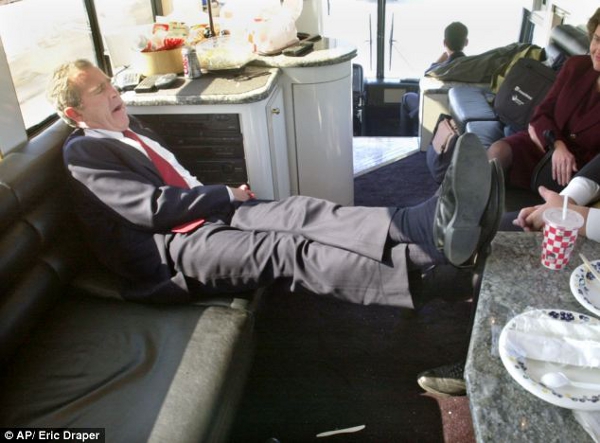 Below we see a more modern version of the campaign bus with a bit nicer decor. This photo is from 2011 when Mitt romney was campaigning as a republican on his "Every Town Counts" tour of America.

In this forward facing view (which includes running mate Paul Ryan) you can get a better idea of how this vehicle was set up. It had custom stitching on the recliner chairs, and what looks like a respectable TV/entertainment system setup. When you notice the design elements of the ceiling (which we think look great), you are reminded that Mitt was not a poor man, in fact, he was fairly wealthy so he didn't skimp when it came to his campaign bus.

And now, onto the ultimate campaign motorhome. This one and its twin backup are owned by the US Secret Service and were built (partially) by Provost and customized by Hemphill Brothers in Tennessee. It's unnofficial name is "Bus Force One". As is the case with "Air Force One" and "Marine One", these presidential transport vehicles only receive this designation when the President is onboard. The secret service purchased this vehicle as a cost-saving measure, and it is safe to assume that there are a few types of protective technology onboard that nobody is discussing. Forget "bulletproof", those windows are more like "missle proof". The invoice cost for each motorhome was approximately $1.1 million each.

More in this category: « The Ultimate Winter RV Ski Trip Can You Hedge Your RV Gas Costs with Oil Stocks? »